Connect to the International Community 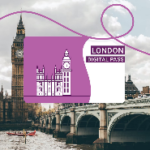 You must Sign In / Register to get more infos

Discover old and new with visits to the Tower of London and the London Eye, and see one of the world's most recognisable cityscapes from the water with a 24-hour ticket for a hop-on hop-off boat ride along the Thames.

The Tower of London

The site of famous political scheming and bloody beheadings, and home to the glittering Crown Jewels, a visit to the Tower of London is one of the most iconic things to do in London. With this ticket you'll have access to the jewels, the White Tower and its Royal Armouries collection, and St John's Chapel, the oldest church in London!

The London Eye is the most popular paid attraction in the entire UK. Take a spin for a panoramic look over London, including views of Big Ben, the Palace of Westminster, Buckingham Palace, and even Windsor Castle on a clear day. It's a quintessential London experience!

The River Thames is an icon of London, snaking its way through the capital with famous landmarks dotted along the water's edge. With this 24-hour hop-on hop-off cruise ticket, you'll float past sights like Big Ben, the London Eye, Tower Bridge, Shakespeare’s Globe, the Houses of Parliament, and plenty of other famous sights. You can board and alight whenever you like, giving you ultimate freedom.